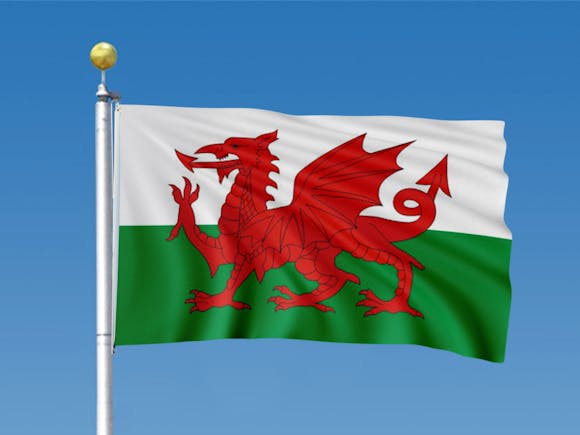 The flag of Wales is an essential as a proud Welshman to fly off the back of any yacht or launch, or fly from one of our best selling sectional flagpoles.

Read more
Shipping options to
Please select one
View our current status on COVID-19
Quantity: 1
6 people have this in their cart
Add to Wishlist

The flag of Wales is an essential as a proud Welshman to fly off the back of any yacht or launch, or fly from one of our best selling sectional flagpoles.

Need a new flag for your Sectional Flag Pole? This flag serves as a replacement or additional flag to the NZ flag included in our flagpole kit.

The Flag of Wales (Y Ddraig Goch, meaning 'the red dragon') consists of a red dragon passant on a green and white field.

The flag incorporates the red dragon of Cadwaladr, King of Gwynedd, along with the Tudor colours of green and white. It was used by Henry VII at the Battle of Bosworth in 1485, after which it was carried in state to St Paul's Cathedral. The red dragon was then included as a supporter of the Tudor royal arms to signify their Welsh descent. It was officially recognised as the Welsh national flag in 1959. Several cities include a dragon in their flag design, including Cardiff, the Welsh capital.

Our friendly and knowledgeable gurus are trained to answer all your questions as quickly as possible. So if there’s anything you need to know just give us a call during business hours, or send us an email any time.

Subscribe to the Trade Tested newsletter to receive updates on new products and promotions.